Healthy California Now-branded mask are now available, to be safe and to help continue our collective message

Will California’s surge of liberal activism pull legislators to the left?

When Jason Schadewald stepped up to the microphone to chime in with support for single-payer healthcare in California, he kept it short, stating his name, hometown and affiliation.

But like scores of others present at the bill’s first committee hearing last week, the elected California Democratic Party delegate from the 41st Assembly District, which includes Pasadena, couldn’t resist going off script. He punctuated his remarks with a pointed warning.

“I represent about 200,000 registered Democrats in that district who strongly support this measure,” Schadewald said. With a grin, he added, “and we’ll primary people who don’t.”

The audience hooted approvingly at the threat of electoral consequences.

The 35-year-old technology consultant is emblematic of a surge of activism rippling through California’s political landscape. Not content to rely on the state to be a liberal bastion of resistance against President Trump and Republican-controlled Washington, D.C., Schadewald and his ilk are turning to Sacramento to pressure the ruling Democrats from the left.

And lawmakers are taking notice.

In recent years, “there has been this false sense … that it was somehow cool to be a moderate,” said Assemblywoman Lorena Gonzalez Fletcher (D-San Diego), of her Democratic colleagues. But now, she said, “it’s suddenly very cool to be the progressive. There’s positive reinforcement now.”

What accounts for this magnetic pull leftward? An influx of new activists, energized by the 2016 election, have turned their focus to state-level politics. Advocacy groups, striving to offer a progressive seal of approval, are poring over legislators’ voting records. And the prospect of single-payer healthcare in the state — the government would cover all residents’ medical costs — offers a galvanizing rallying cry.

With bills still in early stages in the Capitol — and elections 18 months away — it remains to be seen if this liberal clamor can affect policy outcomes or unseat incumbent legislators. But politicians acknowledge the phenomenon is bound to have an impact.

“We listen to our constituents,” Assemblyman Matt Dababneh (D-Woodland Hills) said. “If our constituents are getting more engaged and moving farther to the left, in this case, I think that will have an effect on how we vote and how we do things.”

Some of these efforts started before the 2016 election. After business-aligned Democrats successfully blocked efforts to slash oil consumption, ban fracking and double workers’ pay on holidays, the Courage Campaign, an advocacy group, decided to scour legislators’ voting records to see who, in their eyes, wasn’t sufficiently liberal.

“It was painfully clear that despite being this deep-blue progressive state with a progressive electorate, we were unable to enact the significant progress we feel is so desperately needed,” said Eddie Kurtz, the group’s president.

Scorecards, which are common among interest groups, are imperfect tools to capture what is happening in Sacramento, and many legislators are quick to point out errors or lack of nuance in their tallies.

“For weeks following that report card, [lawmakers] were still complaining about it. It struck a chord,” Stone said. “I think there were some legislators who weren’t used to being called out on their votes.”

The latest scorecard, released this week, features nine legislators — five of them Democrats — in a “Hall of Shame.” The group also notes that seven legislators dramatically improved their scores — a sign, its organizers claim, that increased scrutiny is working.

“We absolutely are claiming credit for that,” Kurtz said. “We think our scorecard had a direct impact, on those folks and others.”

Some legislators downplay the group’s influence.

“I haven’t done anything different. I support the same legislation I’ve always supported,” said Assemblyman Ian Calderon (D-Whittier), who went from an “F” to an “A.”

By compiling the only multi-issue report card — the 2016 scored bills include those dealing with consumer protections, increasing farmworker overtime and criminal justice reforms — the group is trying to position itself as offering a progressive primer to those newly interested in Sacramento.

“We definitely see our role, as veterans of California politics, to help give our two cents,” Kurtz said.

This year, more political neophytes than ever are turning an eye to the Capitol.

The first signs came in January, after the biennial elections for Assembly district-level delegates to the California Democratic Party. The positions — 14 in each district — are the type of low-level posts that help determine endorsements and internal party business, and the elections are typically insider affairs.

But now first-timers had run for the slots, and many had won, beating longtime activists backed by sitting lawmakers. Schadewald was among the newcomers, after heeding Vermont Sen. Bernie Sanders’ call to his supporters to run for local office.

Another new face was Pamela Harris of Oakland, who had decided to channel her grief over the 2016 election outcome into remaking the Democratic Party. To have the biggest impact, she decided to focus her efforts close to home.

“You can’t really penetrate the national party,” said Harris, a 46-year-old filmmaker and mother. “You have to go local.”

Harris joined an ad-hoc group of hopefuls to run as “Groundswell Progressives.” They swept the election, prevailing over a slate of candidates backed by the district’s assemblyman, Rob Bonta of Alameda.

Harris credited Bonta with swiftly reaching out to the new activists. Their impact already is evident in his bill package: One of his measures, which would streamline California’s public records law, was suggested by another delegate.

“You ignore that energy at your own peril,” Bonta said of the spiking interest in state politics. “It’s there. You can’t ignore it. Something is clearly happening.”

Stone, the Scotts Valley assemblyman, said the next challenge will be “getting that energy focused in the right direction.”

“I worry this is a flash in the pan — that folks will come in, shake things up, and maybe get bored and move on,” Stone said.

So far, most of that energy has been concentrated on single-payer healthcare. Hundreds of supporters attended the first committee hearing of the bill, SB 562, which cleared the panel despite the fact that key details — in particular, how it would be financed — are still undetermined.

The California Nurses Assn., which has long pushed single-payer, organized the hearing’s robust turnout. But RoseAnn DeMoro, the union’s leader, said it’d be wrong to chalk up the energy just to her group’s activism.

“This is a spontaneous, grass-roots effort,” she said. “If the nurses went away, this effort would still be there. And that’s the first time in history I could say that.”

DeMoro said lawmakers are keenly aware the issue has become a litmus test for this crop of invigorated activists.

“We’ve got a lot of new legislators. They want a long career,” she said. “And they know this can be a deal-breaker for their political future.” 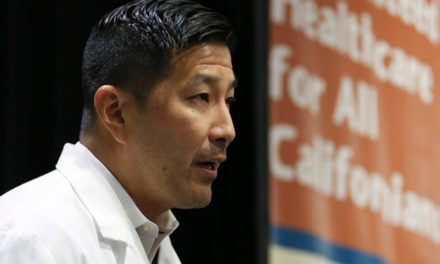 Pandemics and Single-Payer: COVID-19’s Case for Medicare for All

Video: Healthy California for All Commission Meeting on June 12th