The Feminist Case For Single Payer

By Natalie Shure, writing for Jacobin.

In the spring of 1969, a dozen feminists gathered at a women’s conference in Boston and came to a sober conclusion: their encounters with the United States health-care system had been overwhelmingly negative. They felt unsettled by doctors, alienated from their bodies, grifted by fees, and altogether powerless to navigate an industry they believed objectified them just as popular culture did.

The conference launched a years-long project, with each participant delving into some aspect of anatomy, sexuality, or society related to women’s health. The result was a self-published volume of essays called Women and their Bodies, which the Boston Women’s Health Book Collective used to provide women with a resource produced from their own perspectives and experiences.

Within a few years, the landmark feminist booklet was re-dubbed Our Bodies, Ourselves, released by Simon and Schuester, and sold millions of copies. In 2012, the Library of Congress named it one of the most significant works in American history. In recent years, it has inspired Trans Bodies, Trans Selves, which similarly seeks to be a health-care guide “by and for” the transgender community.

While Our Bodies, Ourselves is remembered for its role in the history of women’s health and culture, less attention is paid to its political context. In the 1970s, the small collective became one of the first feminist organizations to demand a single-payer health-care system: “Suffice it to say that capitalism is incapable of providing good health care, both curative and preventive, for all people,” one entry read. “Cost-benefit analysis trades off the benefit to the people of collective public health in favor of the cost to the people of private, patch-up medical care. The capitalist medical care system can be no more dedicated to improving the people’s health than can General Motors become dedicated to improving the people’s public transportation.” In a subsequent edition, they expounded: “We believe that health care is a human right and that a society should provide free health care for itself . . . Health care cannot be adequate as long as it is conceived of as insurance.”

If the book’s then-radical content has so permeated mainstream culture that it would strike readers as obvious today, the same is not the case for its authors’ critique of American health care. In fact, nearly fifty years after the collective articulated its vision for a universal system, “feminist” arguments against single-payer pepper politics and the media.

In June, Planned Parenthood of California refused to endorse a bill for a statewide single-payer system, contending that it was critical to focus on defending the Affordable Care Act (ACA) against GOP attacks instead. Vice cast it as a job-crusher for the mostly women of color who work in healthcare administration. In 2016, presidential candidate Hillary Clinton — whose campaign foregrounded her feminist credentials — famously declared single-payer would “never, ever come to pass.” More recently, Senator Bernie Sanders’s release of an expansive Medicare for All bill has been met with skepticism by media personalities who backed Clinton for her feminist credentials. At the very least, it seems clear that single-payer health care is rarely framed as a feminist issue.

Some mainstream feminists knock single payer as a distraction from the fight to defend the ACA. But while the Affordable Care Act undeniably improved some women’s lives, it could not dismantle gendered barriers to care.

Of all systems, single-payer is capable of going furthest to eliminate them. That’s the vision that Our Bodies, Ourselves adopted nearly half a century ago, and it must be taken up again today.

The Intercept: “Coronavirus Capitalism — and How to Beat It” 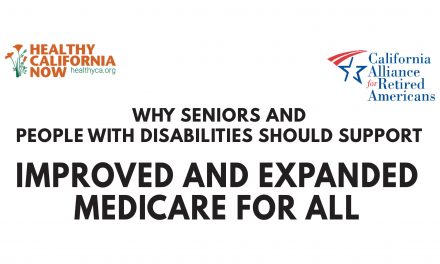 Economic Policy Institute: How Medicare for All would be good for jobs (and wages)