Healthy California for All Commission – Potential Path to California Single-Payer

Gavin Newsom campaigned for Governor with what appeared to be a strong stand in favor of a single-payer healthcare system in California. He has restated that position since taking office.

AB 1810, signed into law last year by Gov. Jerry Brown, created the 5-member Council on Health Care Delivery Systems. Only one appointment was made, however, and the Council never met. Early in his administration, Gov. Newsom proposed transforming this Council to a 13-member Healthy California for All Commission focused, he said, on the policy work needed to transition California to a single-payer healthcare delivery system.

After the February 22 deadline passed for submission of bills to the 2019 Legislature without a single-payer bill submitted, activists’ hopes focused on creation of Gov. Newsom’s Commission that appeared to be more promising than the 2018 Council. But how and when? Nearly 3 months later, the Commission still did not exist. California’s 2019 budget deadline, June 15, was the last hope, but we were disappointed again. No single-payer bill and no Commission. HCN focused therefore on making pro-single-payer appointments to Gov. Brown’s 5-person 2018 Council.

The Commission is Created

Then on June 24, 2019 both houses of the Legislature approved SB 104, an omnibus health trailer bill, that created and codified the Commission, defining its responsibilities, membership and timelines. It changed the name from the Council on Health Care Delivery Systems to the Healthy California for All Commission, and the $5 million funding set aside for the Council was made available to the Commission.

SB 104 calls on the State to advance options for a “unified financing system, including but not limited to a single-payer financing system for all Californians.” (Emphasis added.) It is important to understand that the Commission lacks the single-payer focus we had hoped it would have. This limitation is the result of discussion and compromise between the Governor and Assembly Speaker Anthony Rendon. It resulted in Speaker Rendon’s support, and the creation of the Commission, which we believe is the most hopeful outcome under the circumstances.

Given the absence of a single-payer bill this year in the Legislature, for now the Commission is the only legislative path forward in California that single-payer activists can pursue.

More about the Commission

The chair of the Commission will be the recently appointed California Secretary of Health and Human Services, Dr. Mark Ghaly, who was medical director for the Southeast Health Center, a San Francisco Department of Public Health clinic, from 2006 to 2011.

Beyond this we do know that the following have been appointed: Janice Rocco, Deputy Insurance Commissioner; Sarah Flocks, California Federation of Labor, and Antonia Hernandez.

The five ex officio, non-voting members of the commission shall be the Executive Director of the California Health Benefit Exchange, the Director of Health Care Services, the Chief Executive Officer of the Public Employees’ Retirement System, and the chairs of the health committees of the Senate and the Assembly, or their officially designated representatives.

The Commission is mandated to complete its work by February 1, 2021. The first report from the Commission, due by July 1, 2020, shall include an analysis of California’s existing health care delivery system, preliminary organizational and administrative options for a new system, and options for expanding coverage and financing.

On or before February 1, 2021, the Commission shall submit a second report to the Legislature and the Governor that includes options for key design considerations including purchasing arrangements, provider payments, global budgets, cost containment, information technology systems, data sharing and transparency, financial management systems, governance and administration, including integration of federal funding sources.

In addition to 13 voting and 5 non-voting members, SB 104 provides that, “The commission may establish advisory committees that include members of the public with knowledge and experience in health care that support stakeholder engagement and an analytical process by which key design options are developed.”

There are large healthcare insurance providers in California, including public and private employers, Taft-Hartley healthcare trusts and CalPERS. There are large nonprofits providing direct healthcare, funded by MediCal, the state, counties and private funders. There are medically underserved communities; unions concerned about job losses under single-payer; unions protecting their employer-provided healthcare.

Advisory committees can provide a means of including the participation of these critical stakeholders.

Fall of 2019 will mark a new form of activism for single-payer healthcare in California – winning new allies to strengthen our coalition, while working with elected officials who share our goal. We can expect even more forceful opposition from the healthcare industry, and will have to meet it with higher and higher levels of grass roots action by an ever-broadening coalition. 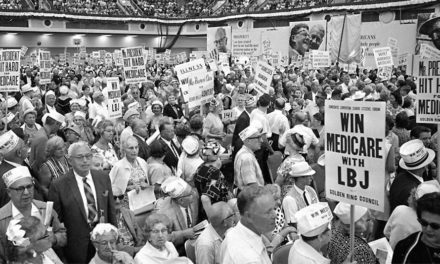 How Medicare Was Won

Former Medicare Administrator on Why We Need Medicare For All